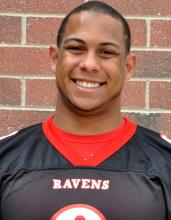 A Hurricane is Brewing in Kansas
A state that normally gets hit with tornadoes faced a Hurricane... a “SPHS Hurricane” and he left mass destruction on the football field.

Ancar was also named a third-team athlete for contributions made in other aspects of the game not related to his role as a defensive end.
Print